The landmarks along the five-mile route of the Valley Forge Revolutionary 5-Mile Run® are helpful in orienting the competitors as they traverse the course.

But they also are living reminders of the men, women and children who, in 1777-1778, faced a bitter winter and dwindling supplies at what is now Valley Forge National Historical Park. 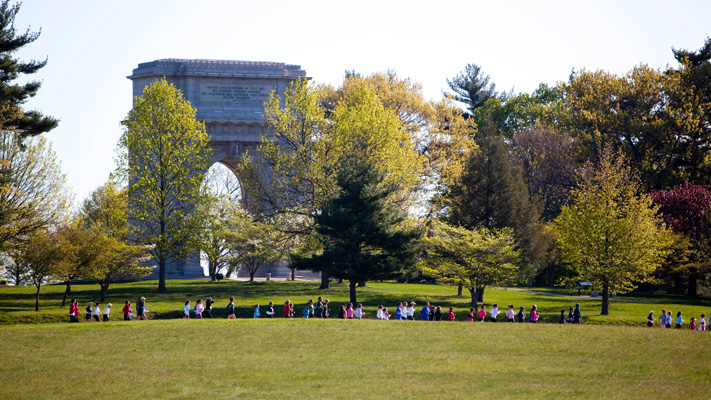 The National Memorial Arch, which runners pass at mile one, was originally one of two commemorative arches planned: one for General George Washington and the second, slated for construction elsewhere on the grounds, for General Von Steuben. These were to serve as actual entry and exit gates, allowing access to and from the park, whose perimeter in those days was defined by iron fencing.

Budgetary constraints scrubbed the Von Steuben Arch, but the Washington counterpart - renamed the National Memorial Arch - proceeded. The location was also revised, placing it along the route used by the arriving army at the outset of the encampment. Construction was approved in 1910 by an act of the 61st Congress.

Design responsibilities were assigned to Paul Philippe Cret, a French-born Philadelphia architect who also taught at the University of Pennsylvania.

In addition to the National Memorial Arch, Cret designed a number of iconic structures in the area: 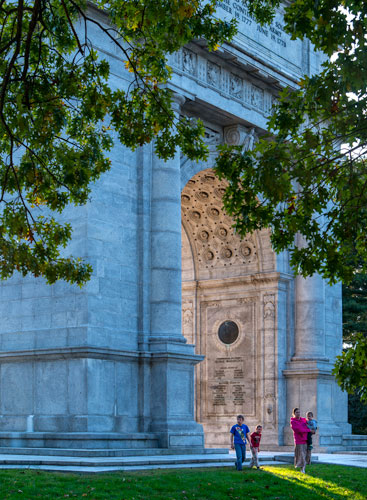 The National Memorial Arch at Valley Forge takes its distinct look from the Arch of Titus in Rome, erected in the first century A.D. That same source has inspired a number of monuments, notably the Arc de Triomphe in Paris and Standford White's Arch in Washington Square Park, New York.

When the National Memorial Arch was dedicated in June 19, 1917, patriotism in the U.S. was running strong, driven by the battles of World War I. A special train of Pullman cars brought members of Congress to Valley Forge on that day, where they mounted platforms decorated with red-white-and-blue bunting. Pennsylvania Governor Martin Brumbaugh spoke of the spirit of Valley Forge and its ongoing power to endurance in troubling times.

Over the course of the following decades, the arch stood proud. To ensure its ongoing ability to withstand the elements, a 1996-1997 restoration project was undertaken by Freemasons of Pennsylvania. The $1.5 million project provided structural repairs, adding nine tons of stabilizing steel. 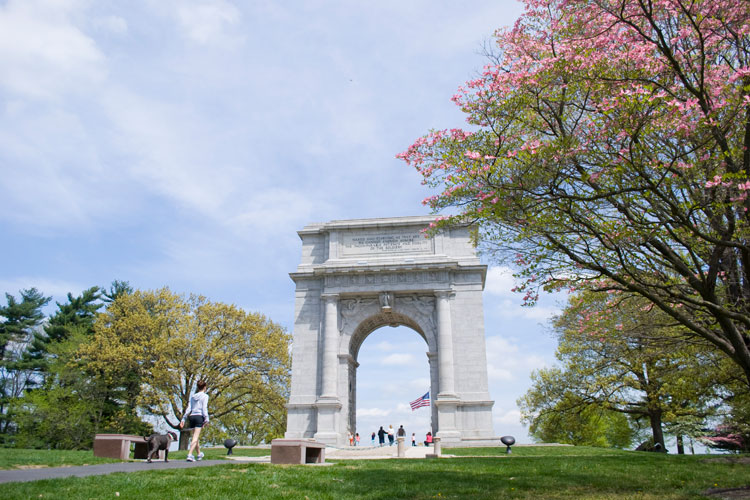 To this day, for Rev Run participants and members of the general public who view it, the National Memorial Arch continues to inspire. Through General Washington's very words, spoken at the encampment on February 16, 1778, visitors draw strength:

Registrations remain open for the 11th annual Valley Forge Revolutionary 5-Mile Run. In addition to the five-mile race, the April 17 event includes a three-mile walk (which passes through the arch on its return leg) and a Young Patriots Fun Run, a 1.776 km event for 6-13 year olds.

All signups are online; the Valley Forge Tourism & Convention Board, organizer of the event, is unfortunately unable to process race-day registrations.