In considering the latest construction project on the Muhlenberg Brigade at Valley Forge National Historical Park, one thing becomes clear: The Continental Army would have clearly benefited from flatbed trucks and an industrial claw crane.

According to Deidre Gibson, Chief of Planning and Resource Management at Valley Forge, the lack of modern conveniences and automation meant Washington's troops to rely on their own muscle and determination. Soldiers hand-crafted more than 1,000 huts as refuge against the cold and wet of that 1777-1778 winter. They foraged for building material, a difficult task by itself, considering the area had already been cleared as farmland and then repeatedly pillaged by the British.

The soldiers therefore relied on scavenging parties, hand tools and oxen or dray horses to drag timber to the encampment. Each 12 x 16 x 6-foot structure that arose took 80 trees to complete, including shingles and doors. By February - the second month of the encampment - most of the troops were under permanent cover, 8-12 men to a dwelling.

The records of that intense effort arises in light of the erection of four new huts, eased by 21st century tools and techniques to recreate 18th century structures.

"These are the first new huts built onsite since the 1970s, when the Muhlenberg Brigade was recreated for the Bicentennial," Gibson says. "There was one other construction project about five years ago, but that replaced an existing hut damaged by fire."

In addition to convenience, another modern-day advantage is uniformity. "We are using Swamp White Oak," Gibson says. "The logs have all been cut to size and stripped of their bark. This is a big departure from what the Continental Army had because they took any tree available and felled it with an axe. Despite Washington's intent that they conform, none of the original huts was exactly the same shape and size."

The crew doing the recreation work begins with a team of professionals but the details will be handled by volunteers. Lockheed Martin, for example, supplies a regular team of employees who donate time, and they will be onsite for this latest effort, attending to the finishing work.

"Once the logs are placed," Gibson says, "volunteers will be packing in the chinking, the filler in the gaps in the walls. Originally, that was mud and hay. Now, it's concrete."

Gibson and the historians at Valley Forge are also taking advantage of the new huts as an opportunity to present the story of the site on a more consistent basis. "The Muhlenberg Brigade is where many of our living history programs take place throughout the year," she says, citing events such as the March-in commemoration each December and the Presidents' Day programming in February.

"The new huts will contain exhibits that provide information when we're not having living history. What was daily encampment life like for a soldier? An officer? Who was here? We'll be talking about the international composition of the Continental Army, the languages that were spoken at the encampment. About the women and children. How different the landscape was then. How desolate it was, in comparison to how beautiful it is now."

Some materials have already been delivered, but construction is not expected to begin until the weather improves. "We need the ground to thaw and to settle. It needs to stop heaving," Gibson explains, describing the springtime condition that earth undulates slightly during alternating periods of wet and dry. 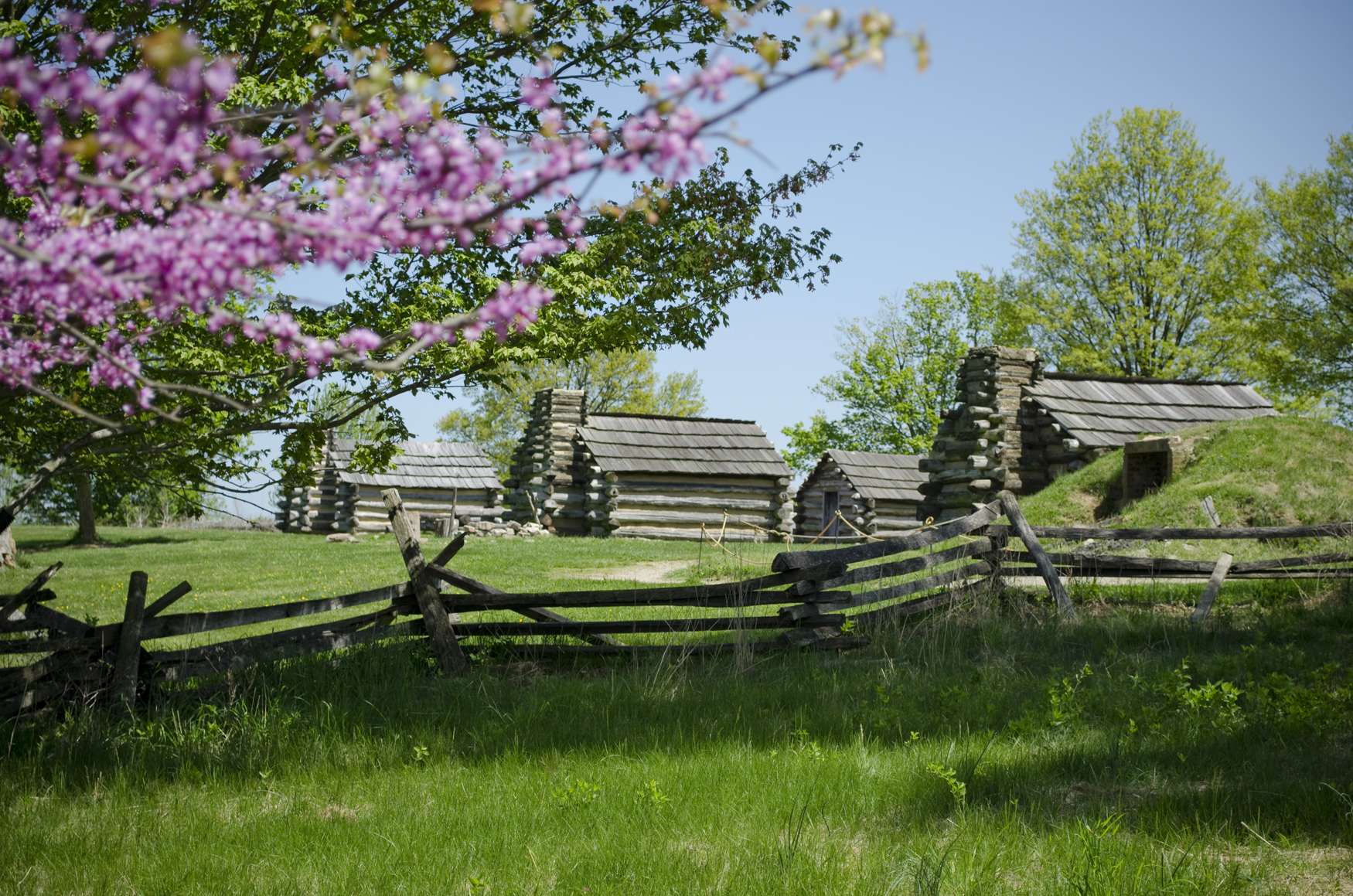 "Once we are able to start, we are estimating a timeframe of two weeks per hut for construction. The last hut should be finished being built sometime in early summer," she says. Setting up the exhibits in each of the four new huts will take additional time, according to Gibson, with a final completion date being targeted by late 2015 or early 2016.

A visit to the Muhlenberg Brigade is a not-to-be missed part of Patriot Trails, the VFTCB's newest touring option for encountering the Revolutionary War as it unfolded throughout Montgomery County. More than just a set of itineraries, Patriot Trails enables visitor to dig deep into the story of our liberty. Our most historic places are linked together in an online resource, complete with information on where to stay and eat along the way.

Patriot Trails can be accessed through our website, where visitors can also find information on our latest hotel package.