In attending the sesquicentennial celebration of Boyertown Borough - that's 150 years, by the way - I learned two important things:

Never underestimate the power of WD40.

Nor the strength of 1960s-era packaging.

In marking 150 years since its founding, borough representatives dug up a time capsule that was buried November 1966, the town's 100th birthday.

That was during the Lyndon Johnson administration. When Doctor Zhivago was a big movie. And Buzz Aldrin went for a historic two-hour spacewalk.

On May 20, at a public event, the time capsule was hauled from its 50-year resting spot in Boyertown Community Park to great fanfare, including speeches from local officials and music from the Boyertown Centennial Band.

The evening event was supposed to include the actual opening of the vessel and unpacking of the treasures it held.

The crowd's anticipation was electric.

What was inside? Essays from school children about flying cars and robots? Tie-dye fashions from the mid-1960s? A few 45's from The Beatles?

The capsule was brought to the surface with the help of a quartet of shovels; a small, industrial crane; a pair of ropes and a fair amount of muscle.

When it first made its appearance, I admit to a slight gasp.

It was a coffin. A child's coffin at that.

The container made sense, however, considering its 1966 donation by the Boyertown Burial Casket Company, which itself was laid to rest in 1988.

The lid was eased open, and nearly fell off its hinges. Attendees young and old pressed forward.

The reveal showed a glass panel bolted in place. Inside - difficult to see - were a bundle of rolled newspapers, some sort of yearbook and a square cellophane packet of something bearing the 1866-1966 celebration logo.

The officials began turning the bolts. Or trying to.

Not one of the 18 iron fasteners would turn even an inch.

So the program quickly reverted to Plan B: The box was lifted to a nearby table where viewers could pass by and peer in, but the full contents would remain a mystery.

Finally, by June 12, the bolted glass panel had been removed and the time capsule treasures were displayed at the Boyertown Historical Society, adjacent to the Colebrookdale Railroad station.

Lori Carnes, anniversary committee organizer, described the process of finally opening the box: "Some of the bolts snapped right off as we were working on them. Others were stuck tight. We sprayed them with WD40 and left them overnight. The following morning, we were able to loosen the rest and get them all off." 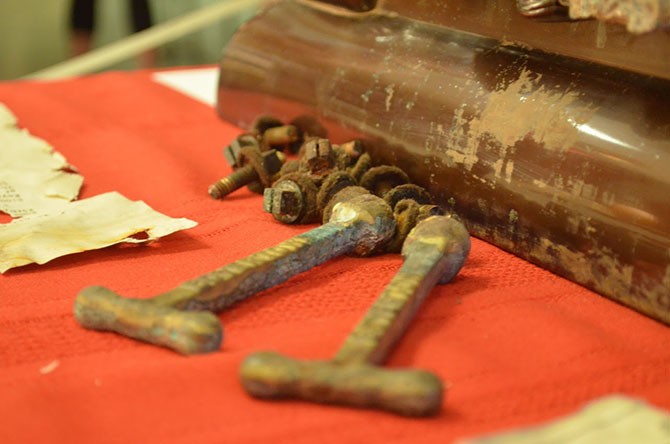 Inside were some of the things I had seen during my peek through the glass: Boyertown newspapers and a book called the Boyertown Battalya, which is a Pennsylvania Dutch word (pronounced "bu-doll-ya") describing a day of celebration in the post-Civil War days.

Most of the other contents centered on the week's celebration of the centennial. A ladies auxiliary committee document bore the signatures of its members; likewise, a list of men who had signed up for the Boyertown Shaving Club survived.

Tickets to a roller-skating party on June 14, 1966, were still legible.

Photos from a Night Shirt Ball of June 9 showed couples in their pajamas, swaying in each other's arms.

The program from a June 19 interfaith service contained detailed information on not only the opening hymn ("Day Is Dying in the West"), but also the cues for when male voices, female voices and the whole choir would enter.

Many of the documents and memorabilia, however, "disintegrated right before our eyes," Carnes described.

A t-shirt, for example, had browned and separated at the seams. And a commemorative disc became unrecognizable from the peeling.

Fortunately, pristine examples of these items - from local citizens - were curated and placed side-by-side with their 1966 forebears.

In mint condition, however, was that square packet in cellophane. Inside were paper napkins from the centennial, looking like they had just come off a supermarket shelf.