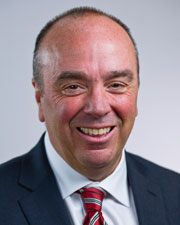 "Mike Bowman is a highly skilled and experienced hospitality executive having worked for some of the largest and most successful hospitality companies in the world," said Montgomery County Board of Commissioners Chairman Josh Shapiro. "When we initiated our search earlier this year, the board immediately approached Mike, given his familiarity with the board's current direction, his proven creativity and energy and his strong customer service focus."

Bowman has more than 30 years of experience in the hospitality industry.  Most recently, he was the president and CEO of Valley Forge Casino Resort where he started as senior vice president of operations in 2011.  He made several significant contributions including a focus on customer service, a revival of the storied Valley Forge Music Fair, bringing in high-caliber headline entertainment and building the resort's reputation as a committed community partner. In 2014, revenue grew by 20%.

Prior to Valley Forge Casino Resort, he worked at Rush Gaming from 2010-2011 and at Harrah's Entertainment from 1999-2010.  At Harrah's he won almost every major management award for results, leadership and customer service.  Bowman started his hospitality career as an executive chef and from 1990-1999 was regional corporate executive chef for Wyndham International Hotels and Resorts. He is a 1982 graduate with honors from the Culinary Institute of New York.

"I am ecstatic to be appointed VFTCB president," said Michael S. Bowman. "As board chair for the past two years, I am very familiar with all of our programs, our members and the wealth of tourism and convention assets in Montgomery County.  I look forward to shining a light on all that Montgomery County has to offer and to working even more closely with our members in every area of the county."

In 2014, VFTCB rebranded the organization and launched its highly successful "Let Freedom Reign" marketing campaign. The VFTCB website which was totally rebuilt and is at the heart of the campaign has seen year over year visits up 78%.  The campaign also included a traveling kiosk which has already visited more than 30 communities, a #MakeItMontco social media campaign, a multi-media advertising effort, an expanded media relations campaign, and a "whistle stop" tour through Montgomery County towns to educate residents and elected officials about the new marketing campaign.

In 2015, VFTCB will focus on the upcoming World Meeting of Families and visit of Pope Francis to the region where Pope Francis is expected to stay at Saint Charles Seminary in Wynnewood, Montgomery County.  In 2016, many of Montgomery County's hotels, restaurants and attractions will host delegates to the Democratic National Convention. Montgomery County tourism is responsible for over 21,000 jobs and $1.6 billion in revenue.

About Valley Forge Tourism & Convention Board
The Valley Forge Tourism & Convention Board is a nonprofit, membership-based sales and marketing organization that actively promotes the Valley Forge area and Montgomery County, Pa., as a convention site and leisure visitor destination by encouraging patronage of its 300-plus member hotels, restaurants, attractions and services. The Board's website serves visitors, meeting planners, tour operators and residents, as well as hosts The Pursuit, a twice-weekly blog.

Editor's Note:  In a separate release, Valley Forge Tourism & Convention Board announced the launch of its summer marketing campaign including new summer imagery and a series of :30 and :15 second commercial airing on 6ABC.