The Cutting Edge of Kitchen Skills

Truth be told, I am not a great cook, which is not to say that I can't cook. I am more of a recipe-follower, one whose inspiration in the kitchen frequently comes from Pinterest or friends who are good cooks.

I decided, therefore, that it was time to learn. Deciding that it was best to build skills from the ground up, I attended one of the culinary boot camps at Cooking Spotlight. According to the syllabus, the three-hour session would cover knife skills, omelet prep and creation of a vinaigrette.

My fellow classmates and I donned aprons, washed our hands and took a seat. 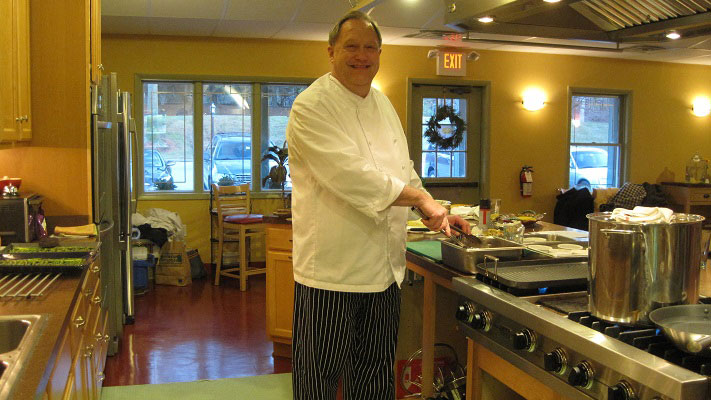 As an introduction, our chef-instructor shared with us a sample of his handiwork, a steaming bowl of butternut squash soup, which not only erased the evening chill but also got us more comfortable with each other.

As we ate, he introduced us to the family of knives. He explained the various sizes and uses and had us note the variations in the different blades (serrated vs. straight-edged, for example). We were then invited to step up and give them a try.

We reviewed technique: As it turns out, grip is crucial. The knife should rest solidly between the thumb and the middle finger, with the remaining fingers tucked back safely. Also, a rocking motion in which the blade does not venture far from the cutting board ensures even knife cuts, which are important for uniform cooking. 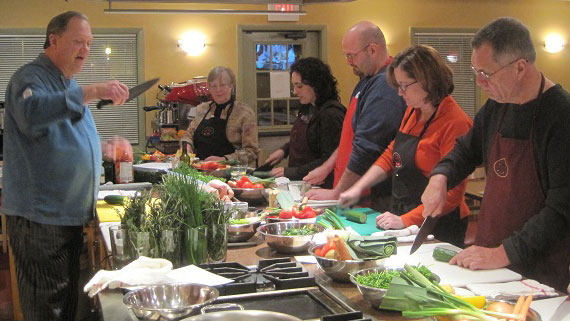 We began chopping celery, then cucumbers, then peppers, then onions. We learned that the contour of the food being cut makes a big difference in how to properly slice it. Grooved foods take a different tack than smooth ones, so slicing a bumpy pepper takes a little more concentration than a smooth onion.

Insider's tip for pepper-cutting: Slice it in half, scoop out the seeds, then place it face-down so that the curved half rests on the board.

We then tackled the little stuff: rosemary, garlic, parsley.

I struggled a little with the rocking motion and had to force myself to focus on keeping the tip of the knife on the board.

Insider's tip for mincing garlic: Smash it first with the side of the knife, then remove that slippery, annoying skin. 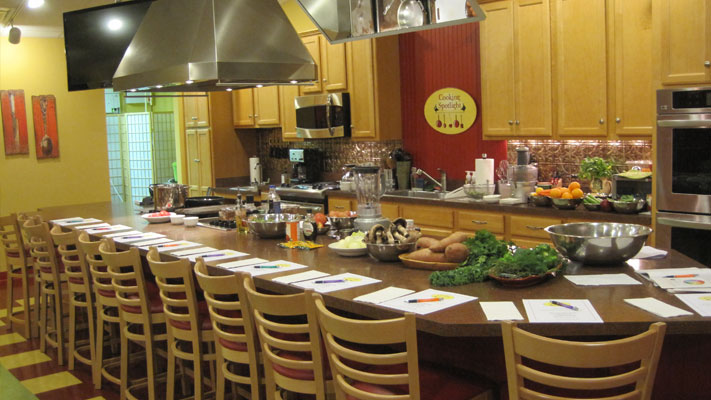 Our chef reminded us that practice makes perfect. His homework assignment was to buy a supply of vegetables and spend the upcoming snowy weekend cutting them into uniform pieces.

Having mastered Slicing 101, we moved onto making an omelet. I was eager to learn the secrets of making a true omelet, rather than what my prior attempts always ended up as: scrambled eggs.

Step one was the one-handed method of breaking an egg. With my small hands, this was something of a challenge, but I eventually got it.

Next was to beat the egg until light and fluffy. And pour the result into the heated pan.

Shake-shake-shake that pan as the egg solidifies and cooks. The idea is to continually free the edges of the omelet - not scrambled eggs! - from the side of the skillet. Add fillings, which in my case meant cheese. 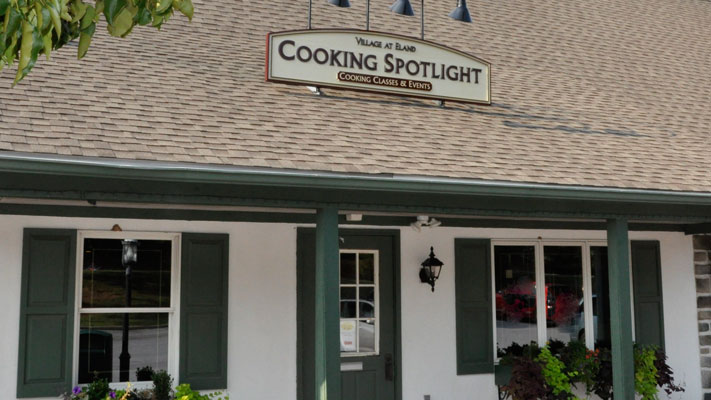 Cook until soft and flip. Ummm, you're kidding, right?

Grab the handle of the pan upside down. Have the plate ready and in one smooth motion, transfer half the omelet to the plate and merely fold over the remaining half.

Somehow, gravity kicked in with my finished product and there on my plate, smelling and looking delicious, was a first-rate omelet.

My classmates completed their own versions (some of which looked better than others), and we were encouraged to eat the fruits of our labors.

Chef went onto the vinaigrette lesson. He gave the shorthand version of the recipe, preferring to concentrate on training the necessary whisking motion. His combination of herbs, Dijon mustard, salt, pepper, red or white wine vinegar and extra virgin olive oil (EVOO) resulted in a delicious dressing for a salad that used several of the veggies we had chopped earlier.

A quick Q&A followed. Our instructor stressed this point: Don't be afraid. Experiment. Practice. Figure it out. Adapt. And enjoy what you make.

His advice came in handy. As the snow accumulated outside my kitchen window at home, I sat down to a quick lunch I had prepared by myself: A savory, stuffed omelet, perfectly plated.

As Director of Event Services and Membership, Megan Tomlinson spends a lot of time visiting our members and discovering many of the unique treasures that Montgomery County has to offer.