The Challenge of the Century

Every running of the Valley Forge Revolutionary 5-Mile Run® is special. Whether participants choose the run itself, the three-mile walk or the Young Patriots Fun Run, proceeds ensure that the visitor experience at Valley Forge National Historical Park is engaging and informative.

Last year, athletes squared off against the challenging terrain against the backdrop of its tenth edition. Decked out in newly branded tees and propelled by a rap song written just for the occasion, those who heeded the call to "Conquer the Valley" also raised a record $35,000 in park support.

The 2016 edition, whose starting gun sounds on April 17, takes place against the backdrop of two milestones: the centennial celebration of the founding of the National Park Service (of which Valley Forge is a significant part) and the 40th anniversary of the establishment of Valley Forge as a federal (rather than state) park. 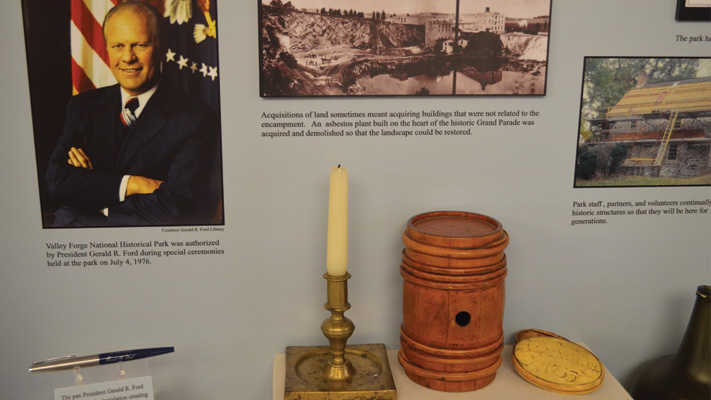 The protection and preservation of significant grounds in the U.S. actually dates back further than 100 years. Yellowstone National Park, for example, received one of the first targeted efforts to safeguard public lands, courtesy of an 1872 act of Congress.

But it took until 1916 to formalize the National Park Service (NPS) as a bureau under the Department of the Interior. In signing the "Organic Act" into law, President Woodrow Wilson formalized its scope: "...[T]he Service thus established shall promote and regulate the use of the Federal areas known as national parks, monuments and reservations..., which purpose is to conserve the scenery and the natural and historic objects and the wild life therein and to provide for the enjoyment of the same in such manner and by such means as will leave them unimpaired for the enjoyment of future generations."

The goals of preservation and protection deepened in 1933, when 56 national monuments and military sites were folded into the NPS. The accent on preserving the country's natural locations spread to its historical ones as well.

The Department of Interior now oversees more than 400 locations across all states and territories within the U.S. 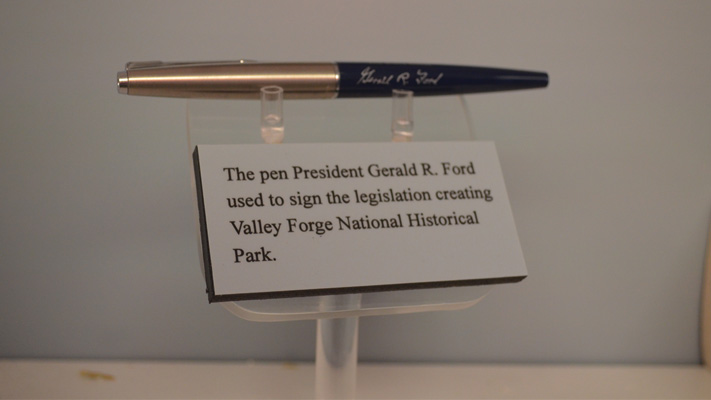 In 1976, in conjunction with the nation's bicentennial celebration, Valley Forge joined the NPS. The legislation was signed onsite by President Gerald R. Ford.

After the 1777-1778 winter encampment, the Continental Army vacated the hillsides at Valley Forge and pursued the British Army. Farmsteads that had been usurped by the Patriots were taken back by their displaced families, who gradually returned to their agrarian livelihoods.

By the mid-1800s, the stirring story of Valley Forge was firmly rooted in the consciousness of Americans, and it rode the crest of the then-popular Colonial revivalist movements throughout art, design, fashion and literature. A train began transporting the tourist trade from Philadelphia to Valley Forge in the 1880s.

In 1893, the Commonwealth of Pennsylvania acted to permanently protect Valley Forge. It was brought under the umbrella of the state park commission, where several of its key landmarks - the inner and outer defense lines and Washington's Headquarters - were preserved.

A fast-forward to the morning of July 4, 1976, has President Ford landing onsite in a helicopter. 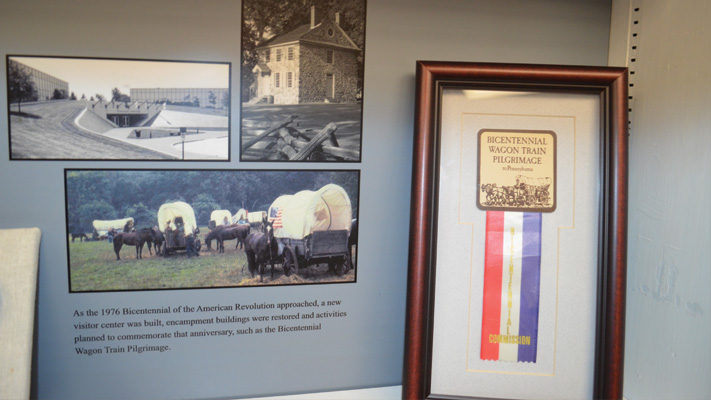 In addition to the President, the park hosted the prairie schooners of the Bicentennial Wagon Train, a massive, year-long undertaking designed to commemorate the western expansion but in reverse. Conestoga wagons, loaded with volunteers and supplies, set off from destinations such as California, Maine and Florida, making their way in horse-drawn style to arrive in Pennsylvania for July 4.

Ford recognized dignitaries that included Governor Milton Shapp and Senator Richard Schweiker. He then spoke passionately about the hallowed ground on which our quest for liberty was solidified:

"They came here in the snows of winter over a trail marked with the blood of their rag-bound feet. The iron forge that gave this place its name had been destroyed by the British when General Washington and his ragged Continental Army encamped here--exhausted, outnumbered, and short of everything except faith."

The grit and determination of the Continental Army continues to inspire to this day.

Especially among the participants of the Valley Forge Revolutionary 5-Mile Run.

Why not join them?

Come and Conquer the Valley!