My desire to visit The Danish Bakers in Rockledge during the Christmas season was rooted in its springerle cookies. Springerle (pronounced schprin­-ger-lee) is made from a thick, sticky dough that is imprinted before being baked, producing anise-flavored treats with raised pictures.

I grew up with them, thanks to a great-grandmother who brought a recipe with her from Alsace-Lorraine, a sliver of land between France and Germany. Her formula was handed down to my father, who made them each year, and the tradition now resides with me.

When I learned that the multiple generations of the McCrimmon family were also continuing the art of this all-but-unknown cookie, I scheduled a visit to watch them in action. 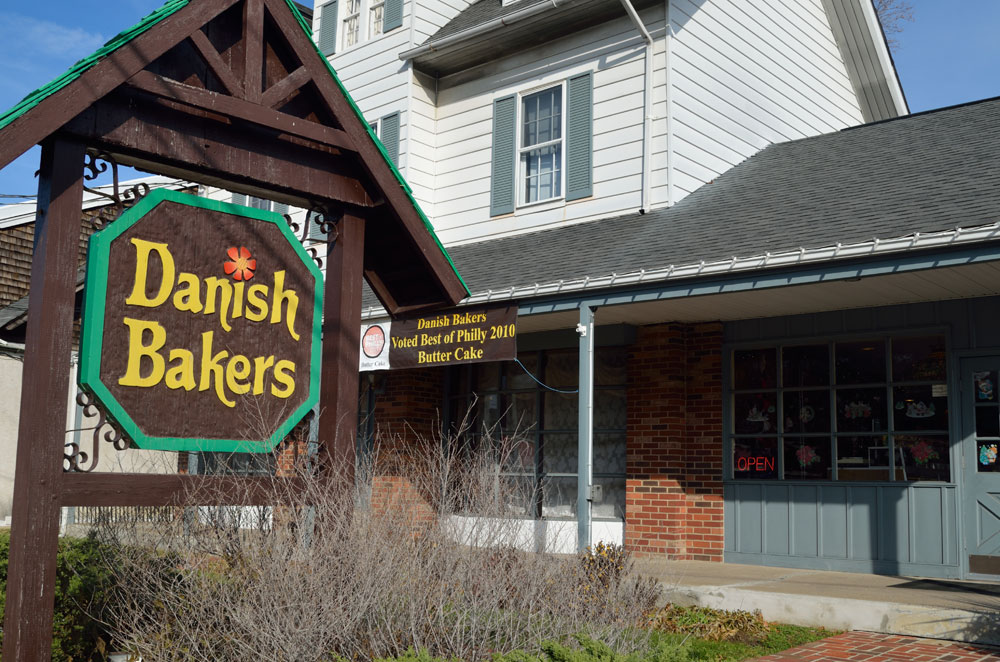 The Danish Bakers has been a Montgomery County staple on Huntingdon Pike since 1960, with a history that stretches back in other locations far longer than that. Ramon McCrimmon is the patriarch in charge of the recipes, and his sons do the heavy lifting, a plentiful task when the springerle batter is made in 100-pound quantities.

When I arrive, the industrial mixer is whirring away, turning eggs and sugar into a syrupy froth.

"We make springerles at least once a week," son Ian tells me, "every week up until Christmas. Each batch of dough produces 1,600 cookies, so that's at least 6,500 that we sell each season. We had a women come in and buy 15 pounds of them. She was shipping them to family all over the country." 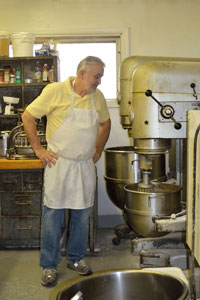 Ramon seasons the batter with anise oil to provide the distinctive flavor and a large splash of melted butter. After leavening and flour are added, the dough thickens considerably until the paddles are churning ropy knots of pale, yellow goo. He eyeballs much of this process, not referring to an actual recipe. "When you make them year after year, batch after batch, the measurements become second-nature," Ramon says.

When the contents of the mixer reach the right consistency, Ramon turns off the machine. Ian hefts it to a large wooden table in the center of the kitchen and dumps it. He and his brother then roll the stiff dough into long, flat ribbons.

Out come the molds: metal rectangles divided into 3x4 segments, each with a reverse image of a tree, pine cone or other nature-based picture.

"Yours are aluminum," I notice.

"Yup. What are yours made of?" Ian asks.

"Wood," I answer, describing the carved block left to me by my dad.

"We had wooden ones," he goes on. "But replaced them because the metal ones produce a little sharper picture and are easier to clean." 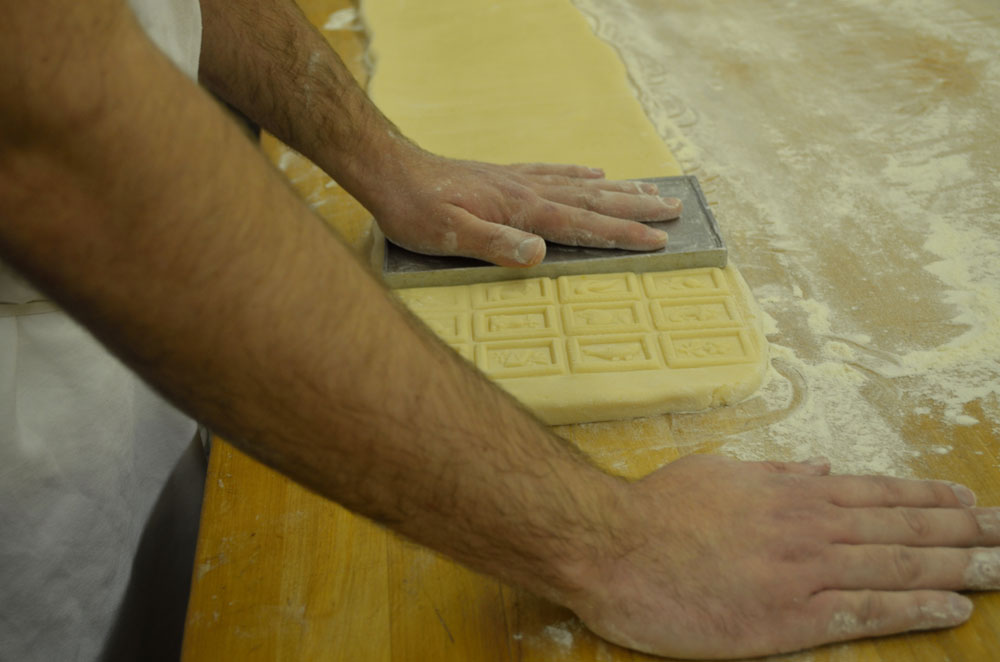 The staff kicks into gear, pressing the molds into the soft dough, lifting carefully, checking the imprints and continuing the process. The cookies are cut into individual rectangles and transferred to a cookie sheet and tucked into the oven.

"The recipe I use calls for them to sit overnight to dry out before baking," I say.

"That's a great way of ensuring that the picture comes out clean," Ramon says. "But we speed things up here. Usually, the imprints on ours are pretty good, though."

Ian's brother checks the baking progress. He lifts a cookie gently to see if it is done. Not quite, but getting there. The kitchen is beginning to smell fantastic.

Eventually, they lift freely from the parchment paper they're baking on. "That's a great way to tell if they're finished, if they release easily," he says. "Also, the tops should be pure white." I note those tips for my own baking session. 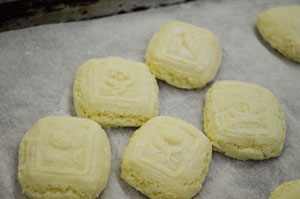 They're done. Out they come to cool. Ian offers me one; it is delicious.

Meanwhile, Ramon is onto another seasonal favorite with a German heritage: Pffernusse cookies. "People think it's gingerbread, but it's nothing like gingerbread at all." The Danish Bakers also produce seasonal cookies from other cultures, such as Polish Chrusciki (Angel's Wings Cookies) and Mexican Wedding Cookies.

From entrees to desserts, ethnic food in Montgomery County reflects the influence of the numerous heritages that mix here, creating opportunities for true culinary adventures. After sampling the cookies at The Danish Bakers (and perhaps picking up some interesting flavors to leave for Santa on Wednesday), consider the Asian flavors at Kamita Asian Bistro or our many fine producers of Italian cuisine: L'Angolo Blue, Peppers Italian Restaurant & Bar, Ralph's of South Philly and Viviano.