Four days before the official opening of the Philadelphia Flower Show, things at Kremp's Florists in Willow Grove are decidedly calm.

Materials and stock are coming in from all over the world and being prepped for the Pennsylvania Convention Center, but considering this organization has been a Flower Show regular for the past 39 editions, it's all organized, well-planned and routine.

At the helm is Scott Kremp, President, who represents the third generation of this floral family. 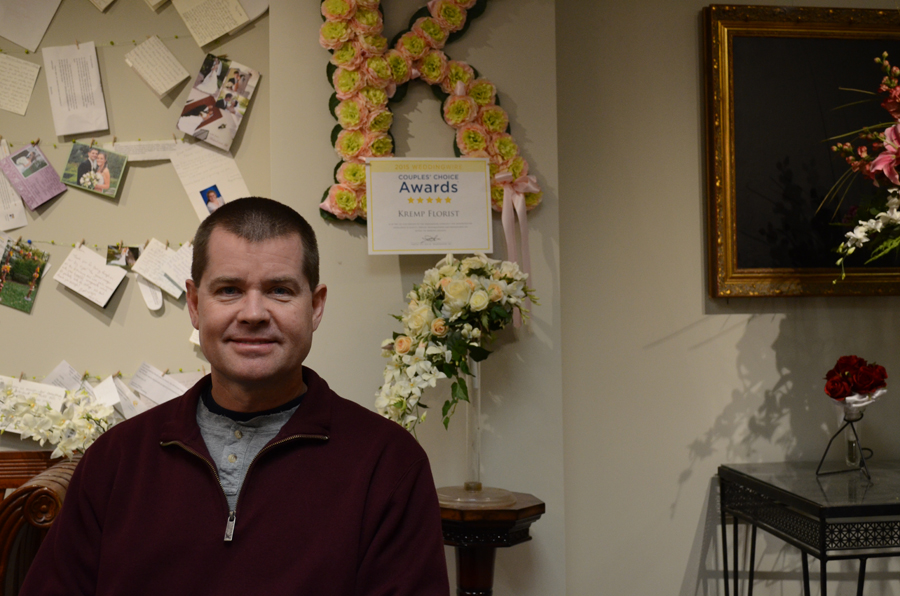 "Our focus at the past few flower shows has been in the Marketplace," Kremp says. "We have done the big, themed displays in the show competition area. But in some respects, the retail end is more fun."

He continues: "This is really a great business we're in. We make people happy. A guy comes in and buys an arrangement for his girlfriend, and she gets it and feels great. She then calls him and tells him how beautiful the flowers are, and then he feels special, too. This business is not always about the physical item we're selling. It's about feeling special."

The calendar drives much of Kremp's business, with the post-Christmas lull as a signal to start Flower Show preparations. "Over the course of the week of the show, we sell upwards of 55,000 roses. They come in from Columbia, Ecuador and other locations in South America. They all have to be processed: bundled in dozens, wrapped, stored in our refrigerated warehouse and prepped for transport downtown." 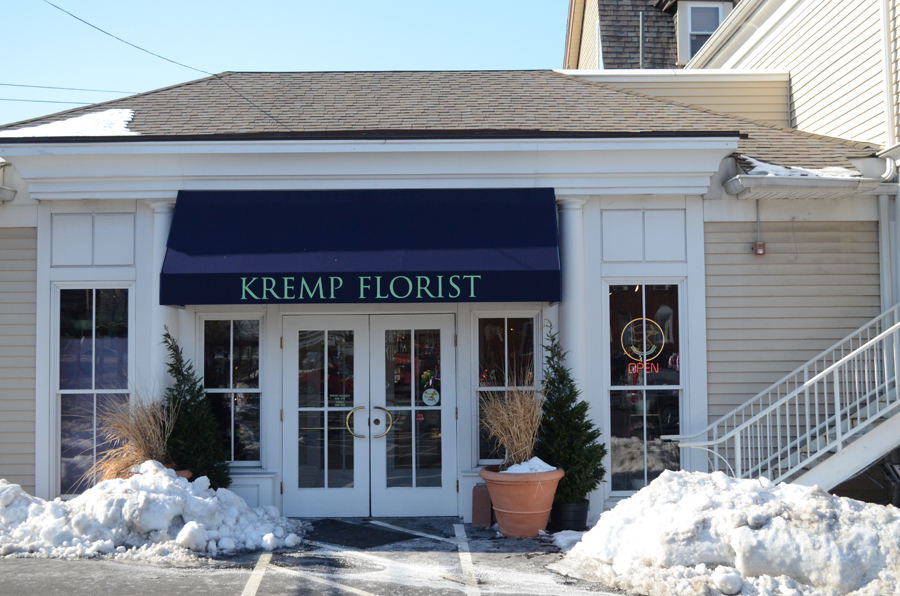 Maintaining that steady presence within the marketplace at the Flower Show means a constant supply of stock and plenty of staff to handle it. "There is no space at the convention center to do any of the work onsite. We have to be ready to unload and sell. It's a lot of product and a lot of work. Our crew of 20 is onsite from about 7 a.m. to 11 p.m., each day."

A fleet of Kremp's trucks makes the trip repeatedly from Willow Grove to downtown Philadelphia, bringing dozens and dozens of roses, but other springtime sellers like pussy willow and fragrant eucalyptus. 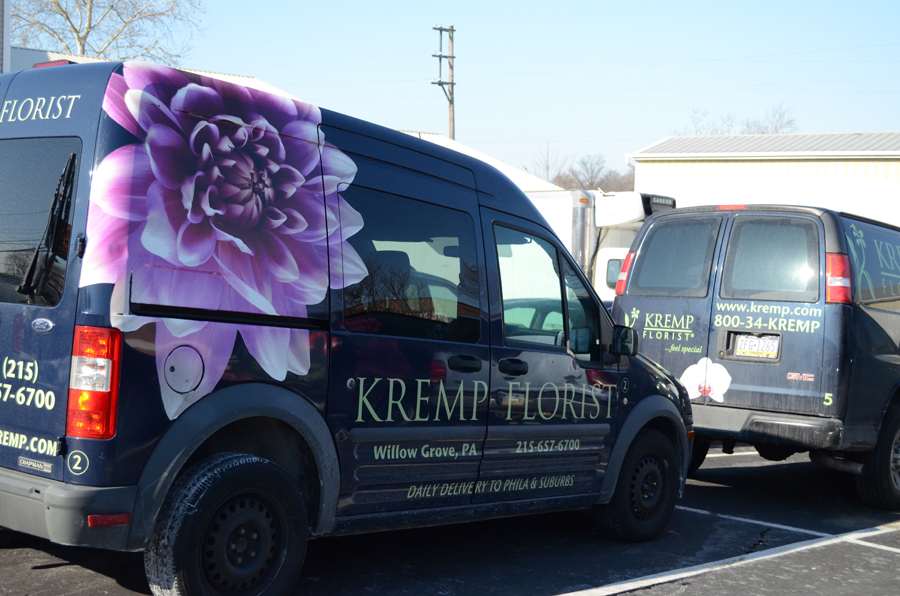 "Interestingly, people think that the red roses sell the best, but really, they don't," Kremp explains. "The multicolored ones do: Yellows. Pinks. Whites. People want to bring the bright colors into their homes. They're tired of the winter drab."

Another challenge of participating in the Flower Show is that it runs parallel to the normal retail operations. "While we're onsite at the show, we are also handling our regular customers, as well as special requests like funerals," Kremp says.

We discuss the weather and its impact on crowds. "Snow isn't so bad," Kremp explains. "It's the threat of snow that we dread. We've had forecasts for snow where no one showed up - and neither did the snow. We've also had unpredicted storms that came in with no effect on attendance. 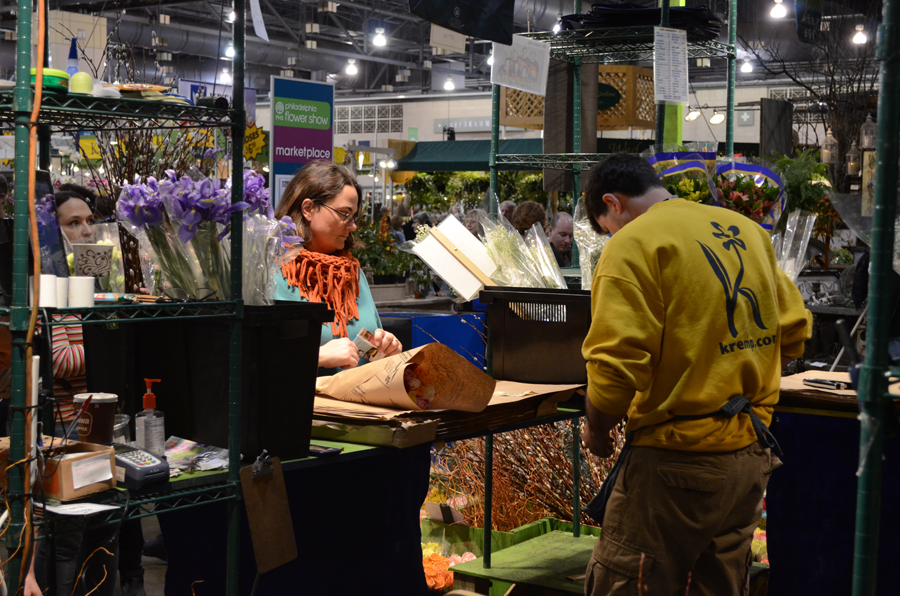 Two days later, the Pennsylvania Convention Center is buzzing - literally, given the drone of circular saws - in a pre-opening rush. Landscapers and florists from all over the region are busily constructing their masterpieces, all themed to celebrate Hollywood movies. There is dirt and water everywhere and I wander from site to site, trying to identify the films recreated in blossoms. A seabed creates the backdrop for Finding Nemo. And some weird creatures done in ivy are clearly monsters from The Nightmare Before Christmas. But other themes are less obvious at this early stage.

Kremp's has three kiosks in the Marketplace and before long, the crews arrive from Willow Grove and begin transporting buckets of flowers by hand into the stalls. 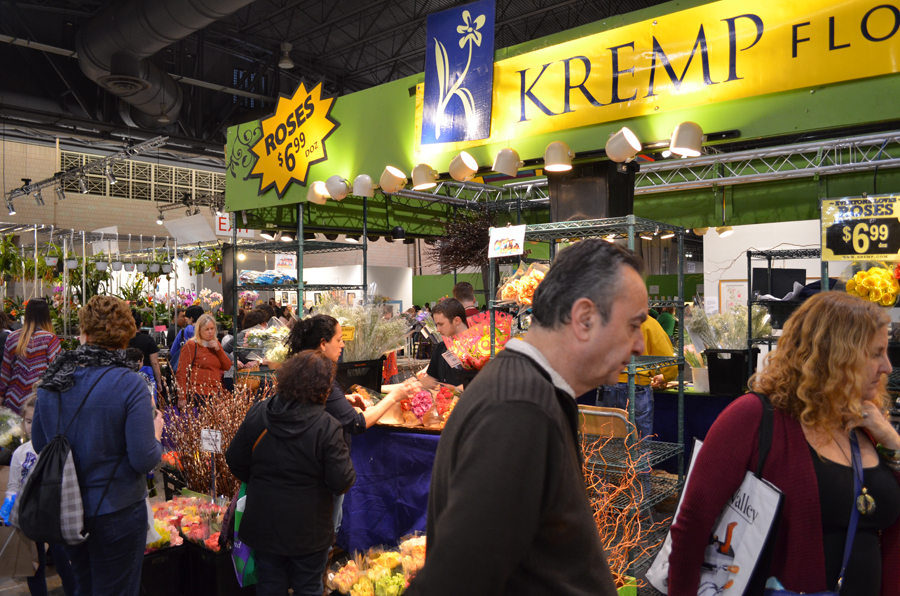 By opening day, both the displays and the Marketplace participants - including Kremp's - are ready.

On the Sunday of opening weekend, I brave the elements and make it to the show. My commute has been marked by flakes falling heavily, and the call is for things to turn icy and slushy. But regardless, thousands of other flower fans are onsite.

The crowds surge through recreations of animated films done in asters - and a wild variety of other plants. Cinderella is evoked in a long table set for a banquet, with chairs askew as if the guests had just exited hastily to find an escaping princess. The Frozen tribute is an all-white staircase, reaching to the ceiling.

It's easy to track where Kremp's is; simply follow the customers toting flowers wrapped in huge brown cones sporting their logo. They are everywhere, looking as if hundreds of customers have bought stalactites and are carrying them home. 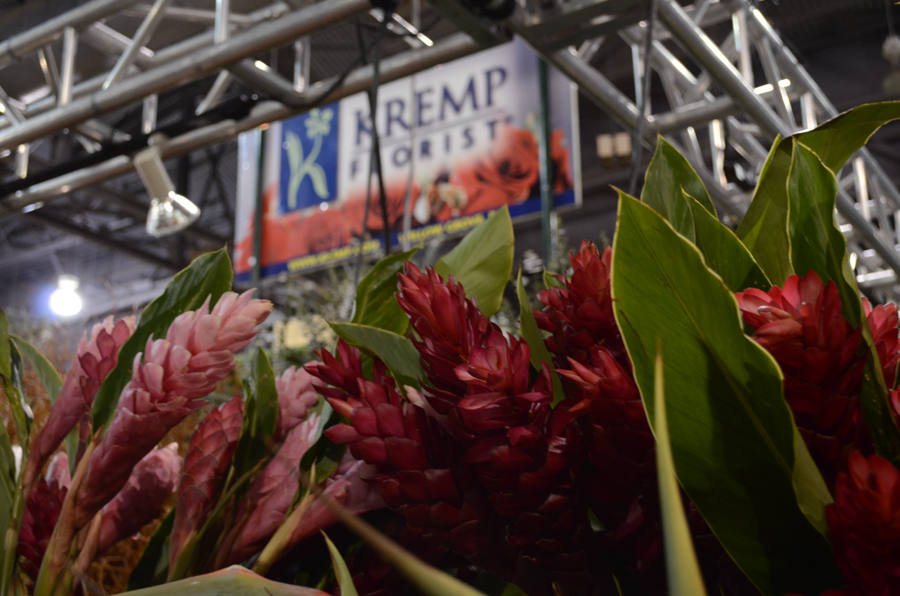 "It was busier earlier," Scott Kremp says, nodding his head to a mass of attendees. "This morning, it was packed. Things have tailed off a little because of the weather, but this is still good."

Business is brisk, and it's not hard to see why. "We sell a dozen roses for $6.99," says Kremp. "We know how expensive it is for a ticket to get in. We just want to enable people to take home a little bit of the Flower Show for as little as possible.

"I love the Flower Show," he concludes. "It turns an off March week into another holiday."

The huge draw of the Philadelphia Flower Show can make logistics such as parking and transportation somewhat of a challenge. Consider this option: Stay at a Montgomery County hotel and commute via public transportation. Train and buses are ample, convenient and economical, and the drop-off points will quickly put you within steps of the fabulous flora.

See our website for listings, and while you're there, browse our winter hotel packages for a host of extras. See the show, enjoy an overnight and go back for more the following day, after enjoying a restful night that leaves you fresh as a daisy.