But that's exactly what happened Sunday afternoon, when a white Jeep containing Pope Francis rounded the bend from the Schuylkill Expressway and came into view.

It was a pause of silence that lasted only a second, however, before cheers erupted, necks craned, people pointed and waved.

It was a thrilling, soul-shaking moment, which I was fortunate enough to witness from a wholly unique vantage point. 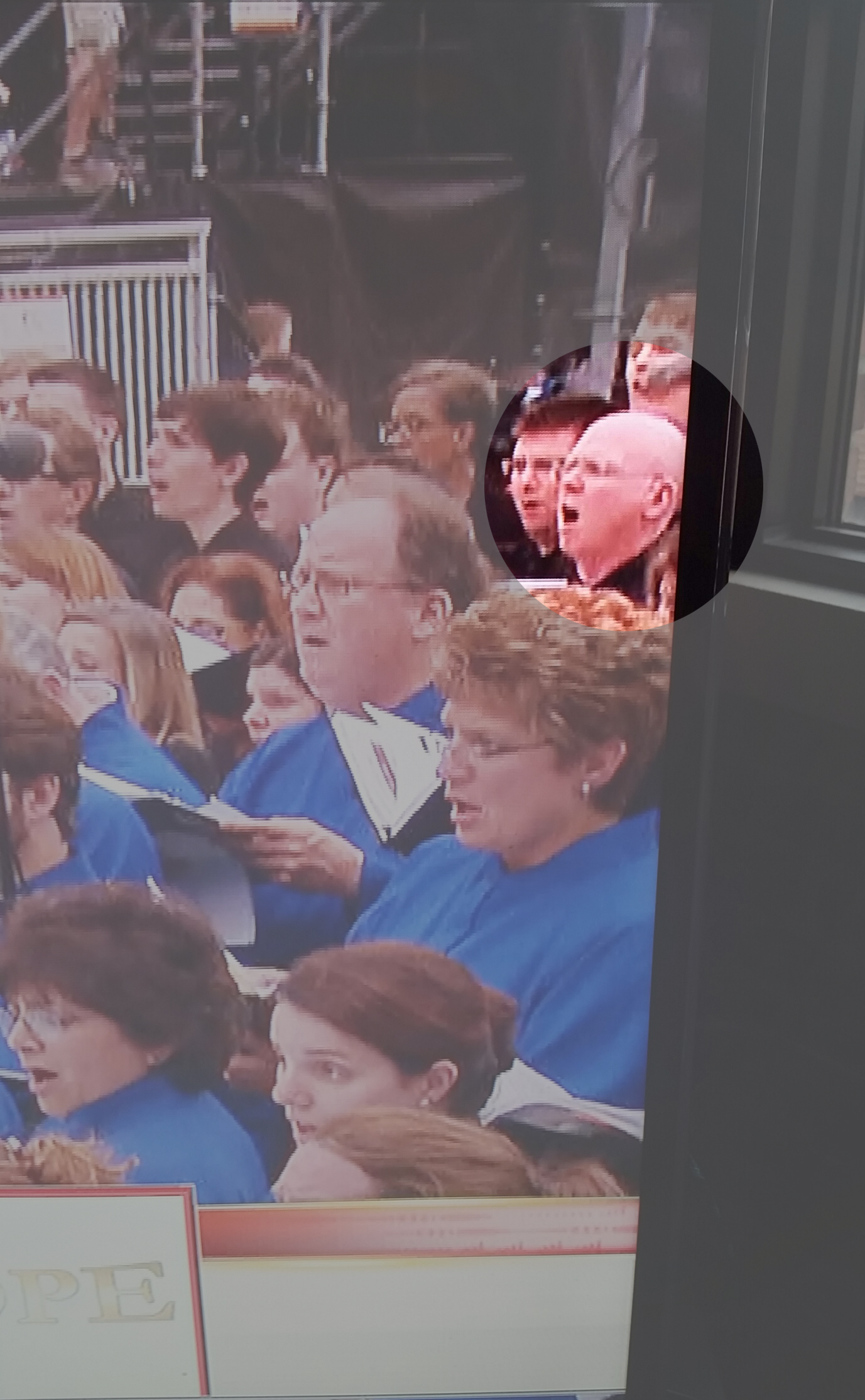 I was on the Benjamin Franklin Parkway as not only a professional in the travel-tourism industry but, using a skillset covered in a prior blog, a member of the 500-voice Papal Choir.

The chorus watched the pope ring around the VIP viewing area and head toward Logan Circle. Unable to see exactly what was going on behind me, I tracked the motorcade's progress through the roar of the crowd, which got more distant but nonetheless enthusiastic and joyful.

It was time to gush no more; we had work to do. Philadelphia Orchestra Conductor Yannick Nézet-Séguin took the podium, smiled broadly, raised his arms and cued his instrumentalists. The violin bows began churning, bringing to life the opening piece, from Beethoven's Christ on the Mount of Olives.

The choir responded: "Halleluiah!" we blasted, our 500 voices blending in four-part harmony supported by brass and tympani. "Praise the Lord, ye bright angelic choirs;
in holy songs of joy...."

I could hear our massive sound rolling down the 1.5 miles of the Parkway like a tidal wave.

The fanfare was the culmination of that day's adventure that had begun for me - and most of my fellow musicians - well before dawn. The members of the Papal Choir, along with thousands of other volunteers, were shuttled onsite via buses that left the Mann Music Center in Fairmont Park. To ensure sufficient time for security checks and screening, we were asked to be onsite and ready for departure at 8 a.m.

For me - driving from my home in Limerick, Montgomery County - that meant a 5 a.m. alarm, giving me enough time to dress, walk the dog, gather my music and depart. I was somewhat concerned with the commute, especially in light of the road shut-downs along the way. But a route through Wynnewood and Overbrook proved to be clear and smooth.

At the Mann, passengers were screened in a process reminiscent of gaining entry into a theme park: Undergo bag-check; walk through a metal detector; turn on demo of electronics; remove prohibited items (with apples being particularly targeted). 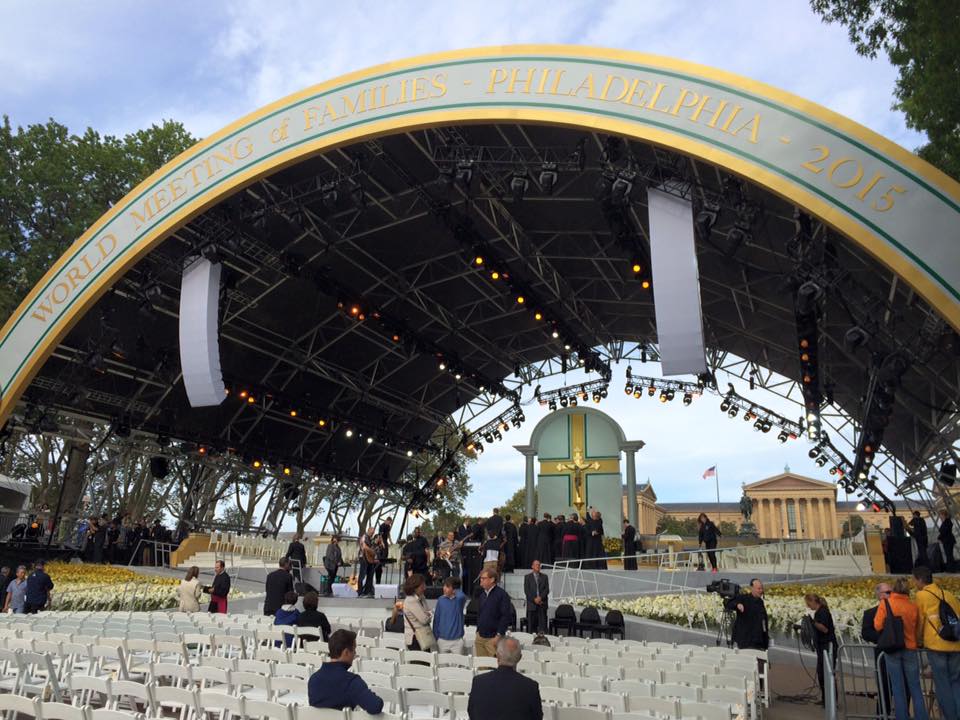 From there, it was onto a flock of yellow school buses, which received police escort to the Art Museum. Among many of my once-in-a-lifetime sights of the day was a deserted Schuylkill Expressway.

We were delivered to a hospitality tent that would be our staging area until we were needed. After check-in, we cooled our heels. I spent the hours chatting, watching the Pope on television and tackling the New York Times crossword puzzle.

At about 3 p.m., we were called to our risers. By then, the Parkway crowd was massive. From Eakins Oval, the throng was so thick that I couldn't see individuals; rather, the attendees appeared like a giant, multicolored carpet, stretching toward City Hall in the distance.

My particular view was somewhat obstructed by television cameras, but I had two Jumbotrons to rely on to keep track of the liturgy. 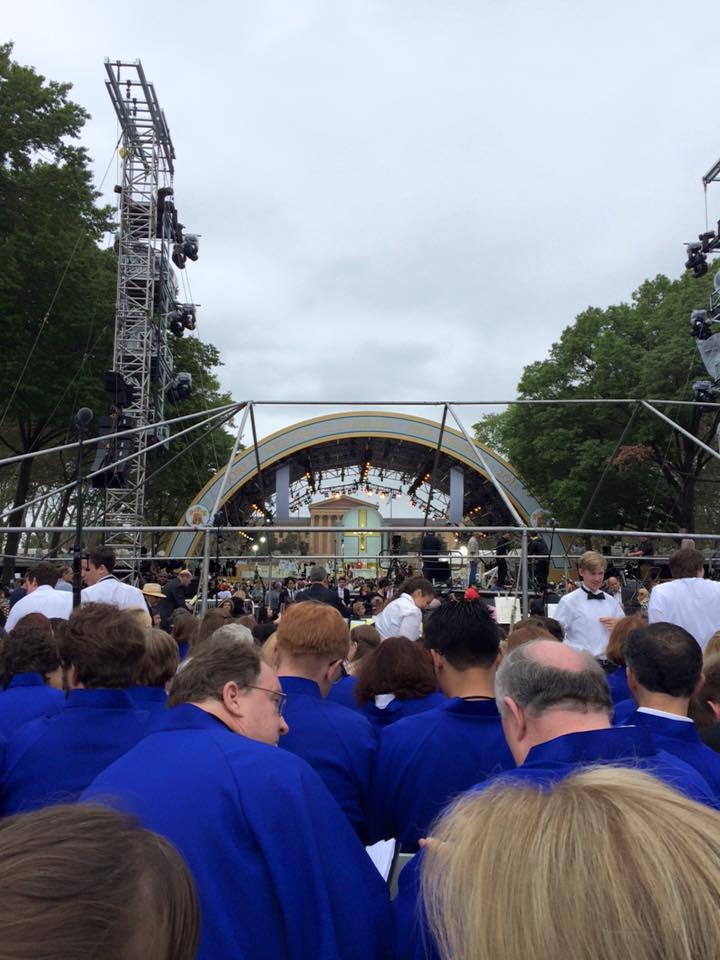 But best of all, my sightlines to the Ambo - the podium from which Francis would preach his homily, was clear. I still needed the huge monitors to my left and right, however, for the translation of his Spanish homily into readable English.

Offertory followed, during which time, we sang an intricate arrangement of Sound the Bell of Holy Freedom, a hymn written specifically for the World Meeting of Families. At Communion time, the entire Parkway joined in Gift of Finest Wheat, a song common in most parish repertoires.

In what seemed like a blink, we were at the final blessing and dismissal. Nézet-Séguin signaled the final hymn, To Jesus Christ Our Sovereign King, and we sang in Latin with all our hearts: "Christus vincit! Christus regnat! Christus imperat!" (Christ victorious! Christ reigns! Christ commands!)

Borne on the air of that praise and still basking in the light of Pope Francis, the crowds began to disburse for home.

The faces of each pilgrim seemed to beam with an inner peace, a renewed sense of community, a strengthened sense of family and just a touch of otherworldly glory. 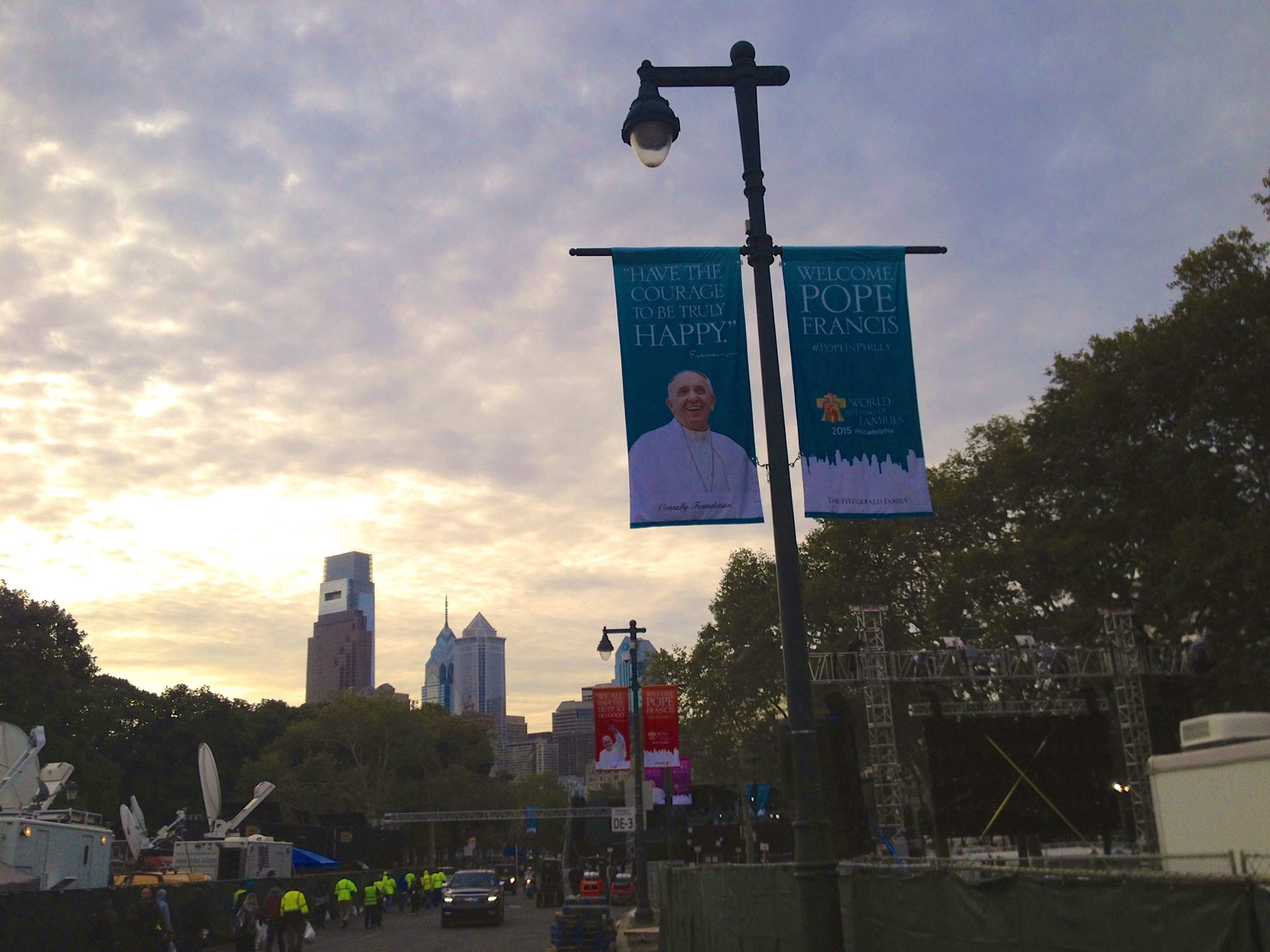