Colonial Theatre Banks On Its Future

It was an event worthy of Hollywood.

With the sunlight turning golden at the onset of dusk, a collection of film fans and local dignitaries gathered in front of the gleaming marquee of Phoenixville's Colonial Theatre to mark a major step in its ongoing success.

The ribbon-cutting, which temporarily halted rush-hour traffic on Bridge Street, launched a new phase for the historic movie palace. 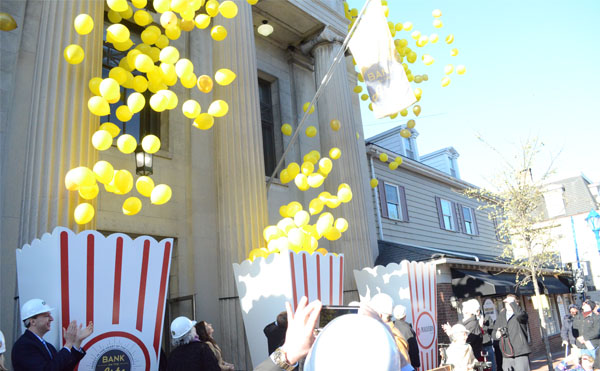 In 2011, the theater bought the property next door, the former site of the National Bank of Phoenixville. When I was onsite at the Colonial in 2014, covering the yearly Blobfest, I toured the new space, which still had drywall partitions from its life as a newspaper office. The building is now a shell, stripped to its wooden beams, iron supports and concrete floors.

The public event had a dual purpose: celebrating this clean slate, from which a series of new screening rooms will arise, and opening the fundraising phase, with a goal of $8 million.

Mary Foote, the Colonial's founding Executive Director, took the crowd through a brief history of the theater: "Over the past 20 years," she said. "We have definitely proven that The Colonial was worth saving," referring to the original plan to keep the movies rolling even when the structure needed significant work. "We raised that original $2 million little by little, and we're going to continue in that revitalization. Just turning the marquee lights on - and holding Blobfest - immediately raised attendance by 30 percent." 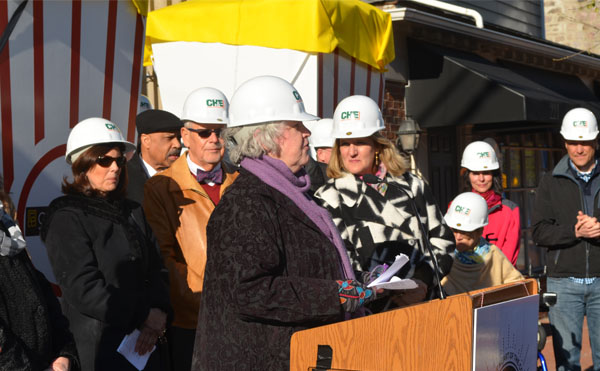 Since that reopening, Foote said, more than a half million people have purchased tickets, grabbed a bag of hot popcorn and settled into a plush seat for an art film, classic revival, new release or live performance.

The addition of the 1925 bank will broaden and deepen The Colonial's programming options. Plans call for a new lobby, two additional screens, a catering kitchen, an elevator to the building's three stories and a performer's dressing room in the former vault. The bank's signature skylight will be refurbished to brighten the stunning entryway. 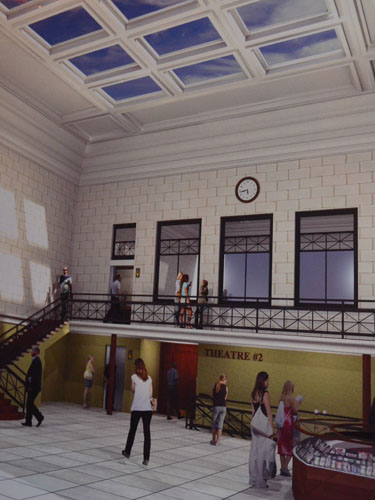 U.S. Congressman Ryan Costello, R-6th Dist., offered the following observation: "If you were to go along the four blocks here, in the last 15 years, every single one of these buildings has a new story to it. The story relates to the revitalization of Phoenixville. I feel that someday they are going to write a textbook about how to successfully go about revitalizing an old steel town, and bring it back and enhance it, and provide a cultural vibrancy and an economic revitalization that is not just good for the downtown, but the overall region."

Kurt Imhof, speaking on behalf of U.S. Senator Robert Casey, Jr., congratulated all the participants before humorously reflecting on the venue's past, saying: "The significance of The Colonial Theater in the entertainment industry is deep. Harry Houdini performed here. And then there's the connection with The Blob. There's probably a current political joke in there somewhere, but I'll leave that to someone more humorous than I am."

Borough Council President James Kovaleski had a poignant recollection about moving to Phoenixville as a twenty-something and finding limited opportunity for socializing.

"My girlfriend and I would come to the downtown district and find little else to do other than the theater. So we would see a movie together. And eventually, I asked her to marry me, and she said yes. And now, all these years later, I want to thank the Colonial and Phoenixville for helping make me a very happy man."

The board of The Colonial Theatre recognizes that work still needs to be done on the auditorium of the original building. Its members see both projects working in tandem, with the increased vitality brought on by the bank building seeding ongoing improvements in the theater.

Together, the two cultural outlets are expected to deepen the appeal of Phoenixville, providing economic impact and community benefit for all. Projections show that use of the former bank building will triple theater attendance in three years. It will also open additional revenue streams, with the opportunity to rent flexible event space.

"The Colonial Theater is an iconic building of our historic past," said the promotional material accompanying the fundraising effort. "It has played a central role in the Phoenixville we know today. The project will protect it for another hundred years and extend that protection to a second, large historic building."

The continuing revitalization of Phoenixville is burnishing its reputation as a true destination. The walkable downtown district has a number of recommendable restaurants, pubs and specialty shops, including Bridge Street Chocolates. Nearby accommodations include the Hampton Inn & Suites Valley Forge/Oaks and Hilton Garden Inn Valley Forge/Oaks. For full details on all Montgomery County hotels, B&Bs and inns, check the resources on our website.