A Stage Show of Biblical Proportions

My first indication of the size of the stage at Sight and Sound Theatre came as I pulled into the lot. The building holding it is massive, with gargantuan Christmas decorations greeting show-goers. 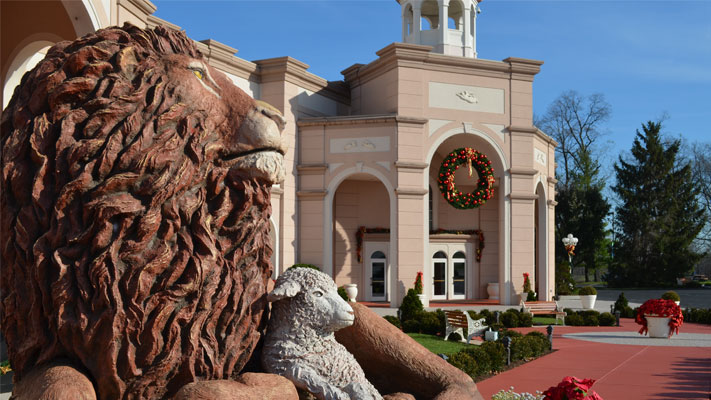 My second inkling came as I was led inside by Katie Miller, Corporate Communications Director. As we stood among the seats and talked, one of the horses used in the production was led across the stage by a handler.

In comparison to the surroundings, dwarfed by the giant space, it looked like a large dog rather than a huge steed.

Miller told me about the uses of live animals in staging "The Miracle of Christmas," the well-known tale of Mary, Joseph and one amazing night in Bethlehem.

"They are meticulously rehearsed," she explained, "using a team of full-time trainers. They are well-acclimated so that the audience and the music and the lights and the singing don't bother them at all. Between shows and when not onstage, they are very well taken care of, in holding pens that are backstage. They also get some of outdoor time, out behind the theater, to graze."

The live animals include two camels, four horses, and a menagerie of sheep, donkeys and even a pair of parrots. They, along with 120 actors and crewmembers, present a brisk, entertaining and heartfelt rendition of the birth of Christ story. 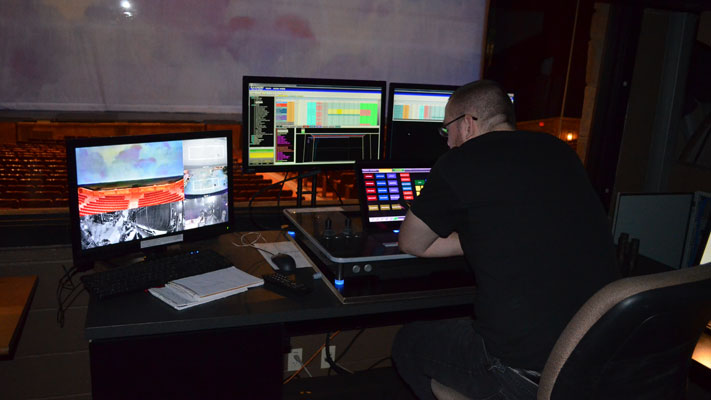 Miller took me on a tour, and the scope of the production became evident.

I met Julie Marie and Tom Sharpes, the actors who play Mary and Joseph, respectively. "It ministers to me every time," Marie reflected. "I find different ways to remind the audience that she was a real person with real challenges. I also try to make sure that they understand her relationships, as a daughter, as a wife and as the mother of God." 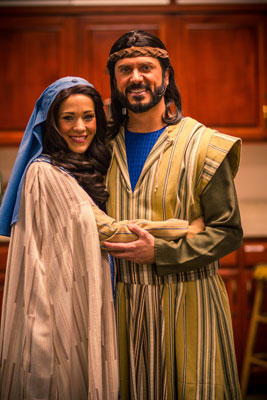 She also described the laser-sharp focus that the show demands. "Just singing and walking is difficult," Marie said. "You've got to watch your breath control and your pacing, both at the same time."

I then met Dan Davis, Deck Chief, who led me up to the stage's catwalks to explain the intricacies of angel flight. A huge truss holds the necessary rigging's, and once an actor is launched, he or she can be navigated left, right, up, down and even in a circle. Motion is controlled using a pair of joysticks.

Back downstairs on the stage Davis described the process of moving the huge set pieces: "It's like a large game of Tetris," he said, "fitting in pieces onstage as they're used and then storing them backstage when those scenes are over."

During the performance, I saw this for myself, watching from the wing as Scene One, Mary and Joseph at the temple, melding into Scene Two, a marketplace in Nazareth. In semi-darkness, a legion of stagehands leapt into action. They swung the temple out of the way and then pushed the Nazareth buildings downstage and into position. Within seconds, they wired the faux buildings for lights and then disappeared.

At that point, I left the performers and took my assigned seat with the rest of the audience.

Casear Augustus appeared on horseback, raising taxes and stoking the flames of discontent. He exited, guiding his steed down a ramp and into the center aisle and exited with grandeur.

When the angels appeared, I was stunned at the ability of the actors. Not only were they fearlessly soaring dozens of feet in the air, but they were also swooping, dipping and spinning - all while reciting lines and singing.

The familiar elements of the story continued to unfold: Mary's dilemma; the visit to her cousin Elizabeth; Joseph overcoming his doubt; the birth of the holy baby.

The plot is familiar to anyone who has ever been to Sunday School, but the grandiose staging makes it captivating. Those who are truly in the holiday spirit may even find themselves wiping away a tear or two.

Tickets for "The Miracle of Christmas" are becoming difficult to obtain, owing to its popularity and the short timeframe to December 25. But there are seats available on a December 29 and 30 and January 2. Additional standby seats may be available for additional performances; audiences wanting to attend are advised to visit the theater's website.

Before or after a performance, a meal at nearby Shady Maple Smorgasbord makes the outing complete.